A visit from Father Norm.

Fr. Norman de Plüm is a man who likes to loosen the collar every two or three years. Whenever he returns from his mission in mainland China or the Philippines, he stops by with a pint of Old Crow or some similar dusty whiskey to tell us about his travels and meetings. One night last month as we’re closing up shop, we look up to see His Fondness standing in the door, his benevolent face ever more resembling something made from small potatoes. He has exciting news.

“Upon submission of a request for secularity to the Clerk of the Supernumerarian at the Vatican and pursuant to due findings by the Panel Preludium, I am hereby, or thereby, granted permission to seek publication of Dunts, my collaborated novel with the writer Mark Mitchell.”

We congratulate him and stand with him and toast the book’s prospects and ask what it’s all about.

“It’s of a genre about which I can safely say I know nothing — the comic techno-thriller. Thematically however, a number of the chapters play loosely with Adam and Eve. The Church oddly had concerns about my selection of fruits for the Garden but  no problem whatsoever of my casting of an NSA operations chief as the serpent.” By now the drink has settled on him like a cat in the lap, and he stares out the window. Then he comes out with it. “Shall I tell you what it is I’ve noticed here this time, back here in the States?”

No, Father, what have you noticed?

“Whenever I come West, I notice the more the money accumulates, and the more it creeps into the people like an ague, the brighter the sheen and gloss given it, like a mortician’s wax, as if to draw away our attention from the state of personal decomposition.”

“Sure, you can’t help but see it. The corporate leaders now all with their hair done and skins oiled. The film stars and the popular vocalists with so many layers of gauze, to look at them they’re little more than pinned butterflies. And the journalists are concerned only anymore with getting their daughters in the best colleges. The bishops and archbishops argue about the coloration of an ideal Islay.”

We look at our shoes, a little shamefaced about our own ambitions lately, and a little more as we remember what these shoes cost.

“Almost everywhere, once the money gathers,” he says, “the worms crawl in, the worms crawl out. But we mustn’t say die, eh? Let’s do good work and keep an eye on what paradise we can build. You’ll see, though. I stuck it to them good with this book, the devils.”

He polishes off his glass and looks for a place to set it without leaving a ring on a manuscript. We thank him for thinking of us, for coming by.

“I don’t know why you write, but me, I do it to make them clench their intestines, the devils.” 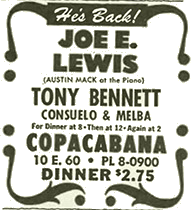